Candy Mare's home world
Applejack is one of the main characters in My Little Pony: Frendship is Magic and a minor character in Something Sweet to Bite. Where she became one of the first victims of the CandyMare, along with Apple Bloom. 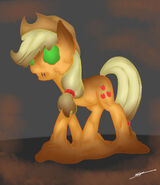 Applejack as a candy ghoul. 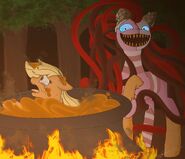 Applejack being dumped in a vat of caramel by Candy Mare
Community content is available under CC-BY-SA unless otherwise noted.