Applejack is one of the main characters in My Little Pony: Frendship is Magic and a minor character in Something Sweet to Bite. Where she became one of the first victims of the CandyMare, along with Apple Bloom. 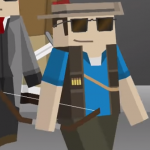