Candy Mare's home world
Pinkie Pie is one of the main characters in My Little Pony: Friendship is Magic and the deuteragonist in Something Sweet to Bite. She is one the ponies indirectly responisible for the ressurection of The Candy Mare and the spread of the Candy Ghoul virus.

As a pony, Pinkie is a bright pink earth pony with dark pink curly hair and light blue eyes. Her cutie mark is a yellow balloon with a blue string above two blue balloons with yellow strings.

As a ghoul, her body took on a more gooey appearance being made out of bubble gum and her hair is now made of cotton candy. Her eyes are now two solid, giant, blue gumballs and her teeth are pink needles of rock candy.

A week before Nightmare Night, Pinkie established a plan of decorating the whole town for Nightmare Night, utilizing the help of the Ponyville children. However she later overhears a conversation between Apple Bloom and Diamond Tiara, about how they weren't going to leave candy for Nightmare Moon. Pinkie then goes over and tries to tell them that they shouldn't hoard all their candy, but they don't listen.

Later, she takes the group to Golden Oaks Library. There she runs into Twilight who is angry about them trashing her library, but Pinkie states that Mayor Mare wanted her to decorate the town this year and Pinkie explains she wants all the buildings to be decorated, to which Twilight allows reluctantly, as long as Pinkie promises to be careful. After a bookshelf gets knocked over due to an argument between Apple Bloom and Diamond Tiara. Twilight asks Pinkie what they're talking about and Pinkie explains to her about the bet the two made. After Diamond convinces Twilight that there are no consequences to not leaving candy for Nightmare Moon, Pinkie tries to change Twilight's mind stating that there is a reason for why they have these traditions, stating they're there to protect them and then shows Twilight an old, tattered book called "Ye Olde Tricks and Treats". Twilight, taking note of the poor condition it's tells Pinkie to put it back, but Pinkie persists that Twilight reads it so she can understand Nightmare Night more. The two end up fighting over the book, eventually tearing it in half and causing several of the pages to fall out. She and Twilight manage to collect all the pages of the book, except for a couple of pages containing recipes for candy which were stolen by Sweetie Belle.

On the day before Nightmare Night, she let's Scootaloo and Sweetie Belle use the kitchen to make candy, unaware of that it was for their bet.

When she goes to the front desk to continue filling out orders, she runs into Twilight who wanted to apologize about what happened at the library and states that she read the book and admits that she finally understands why she was so worried about following Nightmare Night traditions, after seeing how horrifying the legends from book were. Pinkie also admits that they both at fault, stating she just wanted to make sure Nightmare Night is safe this year. Twilight agrees to keep Nightmare Night safe this year.

Twilight then asks where the Cutie Mark Crusaders were, Pinkie then explains they're making candy in the kitchen for their school and asks Twilight if she would like to help, Twilight is doubtful at first but Pinkie manages to convince her to help.

When she brings Twilight in, she quickly discovers that they're using recipies stolen from the book. Scootaloo finally admits that they used the recipies to make candy for the bet. But while Twilight was about to punish them, Pinkie asks Scootaloo if all the candy was made from the book. After Scootaloo confirms it, she quickly realizes the recepies are from the story of "The Candy Mare", so she quickly starts gathering all the candy up to be disposed at the statue of Nightmare Moon in the Everfree forest. Twilight is confused at first, but after shown the title of the recipies, she too quickly realizes the candy is prohibited and helps Pinkie gather it up.

Pinkie and Twilight then drop the candy at the Nightmare Moon statue, the former not noticing the candy moving in the bag.

On Nightmare Night, After fighting over the candy dish with Spike, Twilight asks what Pinkie was doing and she explains she was trying to stay in character with her costume, which was a puppy. She then compliments Twilight on her mad scientist outfit mistaking it for a dentist costume.

Afterwards, Sweetie Belle and Scootaloo came to the library and told them both about, Seeing Apple Bloom's decpitated head being controlled like a puppet. Pinkie then asks Twilight why putting it near the statue didn't purify it. Twlight then explains that she isn't actually skilled in rituals or super stitions. Pinkie then asks Twilight why she even helped her dump the candy by the statue, to which Twilight explains that she only helpe, because it would make her feel better and so she could confiscate the candy. Spike then comes in asks what's going, to which Pinkie tries to tell him about the Candy Mare coming back, to which Spike just laughts at. Pinkie then tries to go outside and tell everyone else only for the samething to happen. The group then decides to tell Mayor Mare, thinking she'll believe them.

The group find Mayor Mare at a dance party in town square, where Twilight tries to explain what's going on calmly, only for Pinkie to blurt it out in front of everyone. Everyone just laughs and believes it's part of a prank. The Candy Mare then appears and starts a massacre killing several ponies. Twilight along with several other unicorns manage to stop her by using their magic to strip her flesh from her bones.

The Candy Mare then attempts to kill Twilight by launching her skull at her only for Pinkie to leap up and smash it with her forelegs, revealing gummy brains on the inside. This causes Pinkie to point out that she's like a pinata. She then points out that the Candy Mare is slowly trying to rebuild herself. Pinkie then reveals that the only way to stop her is to eat her remains. She then proceeds to do this as the others reluctantly follow suit.

After they were done, the four of them headed back to Twilight's house. There Pinkie chooses sitting quietly in the library as Twilight takes Scootaloo and Sweetie Belle up to her room to put them to bed.

When Twilight returns, Pinkie asks Twilight how are the two of them are holding up, as well as how she was holding. Twilight responds, that the two are sleeping, but she doesn't know and explains that she wants to be strong, despite what they witnessed tonight.

Pinkie then pulls Twilight into a deep hug, to which Twilight then asks Pinkie how can she be so strong, in being able to eat the Candy Mare's remains. Pinkie reply stating that Twilight is the strong one, how she was able to stand up against Candy Mare she attack. Pinkie then states she should probably head back to Sugarcube Corner and asks Twilight if she's going to be alright.

Twilight nods and leads Pinkie to the door, but when they get there Spike opens the door covered in blood and missing pieces of his flesh. He states somethings wrong with Rarity before collapsing dead, after that Rarity appears in the door covered in blood and appearently chewing on Spike's flesh. Twilight shouts at Rarity, which grabs her attention to come inside, as she did her skin starts to burn from the light from the library, causing her to slunk back into outside into the shadows.

Suddenly the lights in the library shut off, as a mysterious wind appears in the room. Twilight then turns to Pinkie and asks what's happening, Pinkie replies that she doesn't know and states she's not feeling very good. Pinkie then falls over clutching her stomach, before puking out blood and candy. She falls on the floor in pain and asks Twilight for help as her skins starts to crack and blood starts coming from her eyes and ears. Eventually her eyes pop out all together and pukes out her intestines. After that her body popped open revealing a new form of Pinkie that appeared to made of bubble gum with cotton candy hair. Suddenly the remains of the Candy Mare also came out of Pinkie's remains and started reforming together, just as a jack-o-lantern appeared beneath Pinkie Pie, while voices started whispering the Nightmare Night chant.

Twilight then turns and runs to her room to find Scootaloo and Sweetie Belle, as Pinkie and Rarity chase after. After discovering the two fillies had already changed and that she was beginning to change as well, Twilight decides to let Pinkie and the others eat her to avoid becoming like them, only to transform before they can finish her off.

Pinkie then proceeds to join the Candy Mare's army, as they invade Canterlot and kidnap Princess Luna. 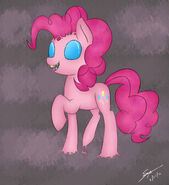 Pinkie Pie as a candy ghoul.
Community content is available under CC-BY-SA unless otherwise noted.
Advertisement